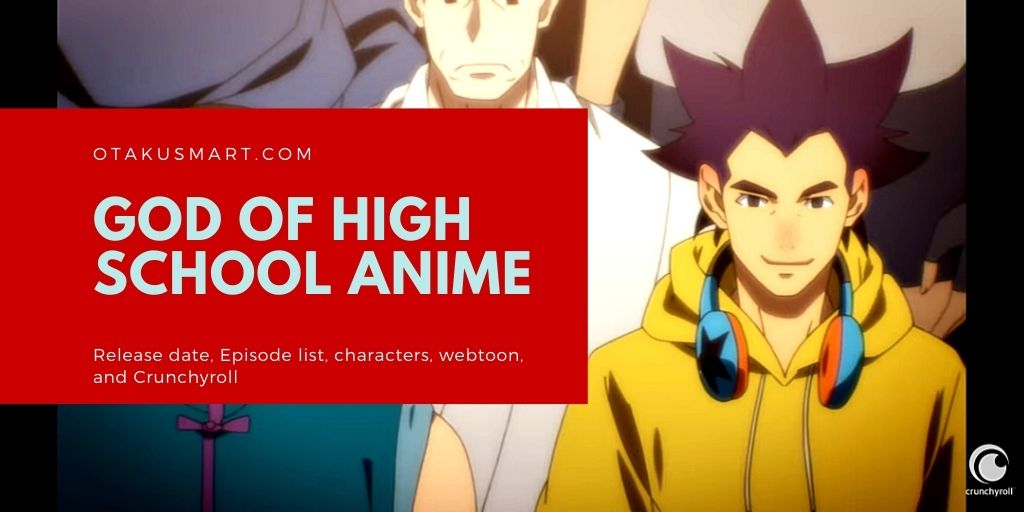 A Crunchyroll original and a webtoon official anime, God of highschool started airing in the month of July 2020. An original webtoon that is getting an anime adaption by MAPPA studio and licensing by Crunchyroll. A good year for Anime fans.

Mori Jin, a Taekwondo master in the making is the protagonist of the story. He joins the tournament and soon discovers that there is more to this tournament besides fighting. God of highschool comes is crafted with wonderful artwork, a fun storyline, and impeccable movement scenes. We can rest assured that GOHS is here to stay.

Otakusmart brings you the God of highschool release date, episode list, characters and everything we know so far.

God of highschool is a webtoon that was originally written by renowned Korean writer Yongje Park. By means of critics and readers alike, the webtoon received huge popularity in the webtoon community. Later in 2015, a mobile version of GOHS was also released by a game development company in South Korean.

Unsurprisingly, fans started to call for an anime variation of the equal. The coolest news is that the anime adaptation has now been confirmed. The anime is scheduled to launch on Crunchyroll in mid-2020. Despite the fact that its final launch date is yet to be confirmed, we can assume the most probable date should be July 2020.

GOHS is the official adaption of the God of highschool webtoon. The total number of episodes is rumored to be 12 followed by another season. It will be an action/martial arts/supernatural anime with a straightforward plot.

Another webtoon that is recently adapted was ‘Tower of God’ which gained tremendous support from anime viewers from all around the world.

In the trailer, we can see a lot of different characters who are skilled in martial arts and they all have different fighting styles. You can see the character list below for all the main characters with voice actors’ names.

God of highschool character names and their voice actors

Some quick facts about God of high school

Yongje Park is the author of God of high school

Sunghoo Park will be directing the gd of high school

GOHS is written by Kiyoko Yoshimura

Arisa Okehazama is giving music for the show

MAPPA studio is producing the anime along with other committee members

GOHS is exclusively License by Crunchyroll

GOHS will start airing in the month of July 2020

For more information about the latest and trendiest anime follow otakusmart

Read about the attack on titan season 4 here

1 thought on “God of highschool release date, episode list, characters and everything we know so far”