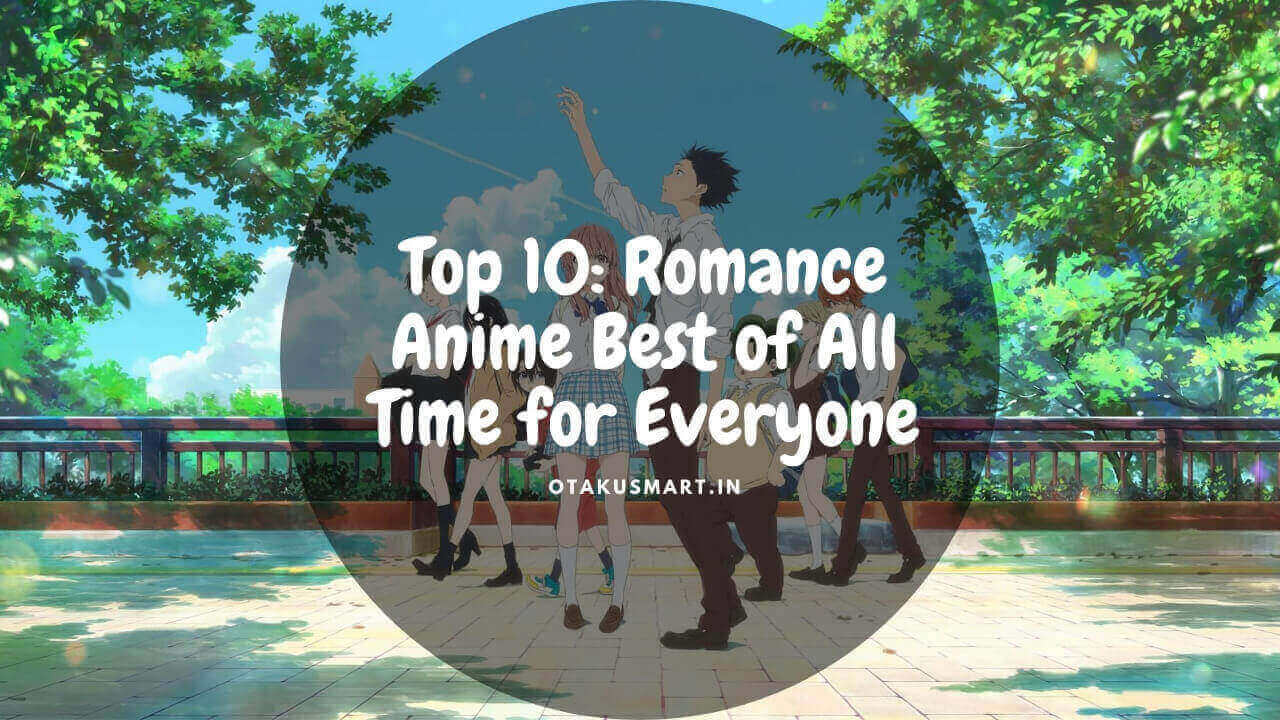 Anime is like the never-ending universe of anime series and movies. There is almost every kind of series and movie in the anime universe. Romance is one of them and also one of the most popular genres of all time. I collected the top 10 romance anime best of all time for you.

Here is the list post to help you to find the addictive romance anime. The data is collected from AniList (it is one of the most popular anime communities).

In this list, you get a mixed collection from drama and tearjerking romance to romantic comedy. Some of them are anime series and movies. One thing is for sure, Every anime in this list is best in its own way. Make sure to watch each of them (if possible).

Note: I also have an honorable mention section at the end of the list. They are popular but not like others.

Top 10: Romance Anime Best of All Time for Everyone

1. Rascal Does Not Dream of Bunny Girl Senpai

Let’s start the list with one of the most popular comedy romance anime best of all time. Rascal Does Not Dream of Bunny Girl Senpai is a High School romance anime. An anime where the main protagonist falls in love with an older girl or his senpai. Anime is supernatural and filled with comedy scenes.

The best point of this anime is not comedy and romance but the issue they are solving. The social anxiety and all that comes with it.

“Bunny Girl Senpai handles the most arduous issues in adolescence: social anxiety and all that comes with it.”

by an AniList Reviewer

If you are new to the anime world then it should be one of your early anime series you should watch. Or even if you are a hardcore anime watcher then you don’t have to miss it.

2. Re: ZERO -Starting Life in Another World

Frist Isekai anime seires in the list. Re: Zero also has the title of “The Best Isekai Anime Series.” If you love to watch Isekai then you should watch it now (if you did not watch it yet).

The positive point about Re: Zero is its well-written plot and story. And also adorable mads in the anime. Re: Zero got 9th place in the list of romance anime best of all time.

The main protagonist is transported to another world without any super or overpowered strength. This phycological anime series and one of the best when it comes to romance.

You can also watch it if want to see cute/kawaii maids (I am talking about Rem).

“Life wouldn’t be less than a simple and plain matter of choices. Wherever our life is right now is due to the choices we’ve made in the past, we’re doing and we’ll make in the future. Considering everything said “Life” would be an abbreviation of the sum of choices we’ve made up until now.”

I choose this paragraph to explain this anime in a few words. The anime is 11 episodes long. Every episode and every single second is enjoyable.

The story is about a boy who is on a journey to make friends, experience love, and want to live a life of his choice.

The animation is different from other anime series. But did not make any difference. Because the main point is its story and plot.

Spirited Away is a masterpiece by one of the best anime production houses. The Studio Ghibli production house. It’s a fantastic movie for children who wants to watch it with their family.

What do you expect from an Oscar-winning movie? A story about a girl who is stuck in a world of spirits and her parents turned into pigs. Now, she has to live with spirits and find a way to get back home.

A boy helps her to adjust to this unknown world and gives her the job of cleaning a bathhouse.

Did she able to live in this strange world? Is there a way to get back to her home? Are her parents able to become normal? Don’t miss this heartwarming and interesting anime movie.

Do you want to watch a Romantic-Comedy anime series? Then no look further. You can’t find better than Kaguya-Sama: Love is War. It is the best comedy and romance anime best of all time.

From animation to story and character development, everything is perfect. Even side characters are well written and have explained the past. It makes it more interesting to watch.

The story is about two people who love each other but don’t want to accept it. They want another person to confess first. The phrase “Love is War” represents using any tactic to make to confess to others first.

Most popular and with 5th position in the list of romance anime best of all time. Some people also called Your Name an overrated anime. But, it is fine.

Supernatural, comedy, and romance anime best of all time. The main plot of the story and also the turning point of the story are amazing. You like how unexpected things happen in Your Name anime movie.

In Your Name anime movie, two people switch bodies many times for a few weeks. They have to live each other’s life to maintain the secret.

The unique thing about this anime is its animation quality. At first glance, it is very difficult to tell the difference between anime and real-life objects. Because the animation quality is killer and the majority of places exist in Tokyo, Japan.

“Poignant. Compelling. Heartbreaking. Clannad is one of the most cherished anime of all times.”

The most tear-jerking romance anime best of all time is Clannad. Clannad’s second is the 5th highest-rated romance anime on Ani List.

Clannad is a Slice of Life anime series with 23 episodes in the first season. If you want to cry or watched too much comedy anime then give it a try.

The story is about a boy who has a terrible past and a dull present. But everything starts to change when he meets a girl named Nagase. She and her friend her him to make his life interesting.

Our top 3 ranking starts from here! Short, Simple, and clean romance anime is the best and must-watch for everyone. The best reason to watch this anime movie is because of its pace. You don’t feel any rush in A Silent Voice.

A Silent Voice is the highest-rated anime movie in the anime universe. The story is about a bully boy and a deaf girl.

In many parts of the story, you want to cry and get emotional. In my case, I get emotional after completing the movie and while thinking about it.

The best point of A Silent Voice is it teaches a valuable life lesson. And everyone should teach this lesson to their kids.

Monogatari Series is one of the highest-rated anime series on My Anime List and Ani List. Most of the seasons rank in the top 10 anime of all time.

The anime series is an adaptation of a Light Novel. This is my first anime series that runs around Japanese spiritual beliefs.

In the list of romance anime best of all time, Monogatari rocks. It has the perfect combination of romance, comedy, and fan service. Some people also think Monogatari is a Harem anime but it’s not.

The only problem is with Monogatari’s watch order. The chronological order is not recommended to watch. There are many watch orders out there (I guess three). But the most popular and recommend is by his author.

Now we have our number one, Romance anime best of all time. The Fruits Basket anime series. The highest rates anime (4th and final season). It’s not the best because it has a season with the highest rating.

The thing that makes Fruits Basket is its story. The emotions, feelings, and colors of life. Everything is executed. Anime is adapted from the manga. And has two Fruits Basket anime series.

The first one is incomplete and the second season was released 18 years after the first one. The 2nd season is actually a total new Fruits Basket anime series.

Everyone recommends the new one because it is complete and also true to its manga. Fruits Basket is the only Shojo anime series on the list.

The reason for this section is my personal interest. I like each of them. They are not popular and have good ratings like others. Each of them is a wholesome and enjoyable romance anime best series.

3. Your Lie in April

The one anime in my life which cause me to post anime syndrome for the first time. If you did not watch Your Lie in April yet then you are missing something big.

This is the best combination of Romance, Drama, and Music. Your Lie in April is one of the few popular music-romance anime best of all time.

Love tringle is not complicated but confusing for most people. Our main protagonist is a genius when it comes to piano. You are going to love music (if you do not like it) after watching Your Lie In April.

2. I want to eat your pancreas

Another Heartbreaking anime in the list of Romance anime best of all time. If you like anime in which a popular girl falls in love with an unpopular guy. Then this is for you.

Most people do not watch because of its name “I want to eat your pancreas.” The female lead in this movie has a pancreatic disease. There is a saying is if you have some kind of organ problem then you should eat that organ. That is why they call it “eat your pancreas.”

The animation quality is next level. One of the best wholesome romance anime best of all time. While watching this anime you smile, laugh, and get emotional in many scenes.

If you are sick of High School romance anime then “Josee, the Tiger, and the Fish” are best for you. Here you get to watch see the romance of college students.

The story is about a girl who lost her legs in an accident. And a boy who wants to become a diver and study abroad. Their romance and love chemistry also starts with an accident.

The animation quality is like Your Name. Not better but not less. Another thing is the story, is unique, enjoyable, and heartwarming. The anime is released in 2020 and become popular within a few months of release.

Another wholesome anime for you make sure to watch it on my account. I did not watch it yet but it is on my watching list.