I get that K-pop is all about flashy, colorful, and loud music that makes you jump out of your seat and grind harder for your dreams. Kpop is also a place where you can find peace.

However, the ridiculous thing about being a K-pop Idol is over-the-top fashion, which sometimes surpasses the average yearly income of some individuals.

These idols have an insane lifestyle, and what’s more insane is these outfits that cost thousands of dollars.

In this post, we’re looking at some of the most expensive outfits Kpop idols have worn. The list includes some famous Kpop idols known for their fashion choices and some not-so-common outfits that you won’t see anywhere.

Please note that the article’s goal is to showcase these outfits and their price tag, and in no way are we degrading the value of common people because everyone lives their life without up to their potential and powers.

With that being said, let’s see what kind of outfits Kpop idols wear.

BLACKPINK is probably the biggest girl group the Kpop community has ever seen. These four women have raised the standards for international Kpop following and represented Kpop on global platforms.

Kim Jennie is known for her over-the-top clothing line and fashion accessories among the four members. Among everything she wore, fans have spotted two of her dresses that go beyond the understanding of common people.

Jennie is also known for wearing expensive clothing at home or while traveling, making her the most fashionable Kpop idol of this generation.

Miss A was one of the most influential k-pop girl groups in history. The group was crowned as the “Top 10 K-pop Girl Groups of the Past Decade” by Billboard. After Min went solo, the group slowly broke off, and JYP officially announced its disbandment in December 2017.

Before that, Miss A’s Suzy was known for her out-of-the-world dresses and fashion style. Reportedly, she wore an Alexander McQueen one-shoulder wool dress, which cost around $1,285.

Afterschool is another all-girl group consisting of Nana, Raina, Kaeun, E-Young, Lizzy, UEE, Jungah, Jooyeon, So Young, and Kahi. The group had one of the most innovative systems where members were presented to the viewers as school students, and it quickly gained popularity.

Unfortunately, the group was also disbanded, leaving Nana as the group’s sole member. Nana also had an expensive taste in fashion, and she wore a Saint Laurent Gold Guns Jacquard Dress, which came with a costly price tag of $2,099.

SISTAR debuted as a four-member girl group in 2010 and was insanely popular for their tracks such as Touch My Body, I Swear, I Like That, and more. Unfortunately, the group was also disbanded in 2017, the same year Miss A disbanded.

Among the four members, Soyou once wore a Blumarine Techno Lurex Brocade and Lace Dress, which came at an expensive price tag of $3,322. As of now, Soyou has a YouTube channel where she shares her daily life and covers songs for fans.

Girls’ Generation paved the way for modern Kpop for women, and it continues to be an inspiration for young girls who want to pursue Kpop as a career.

A few of the members are known for their over-the-top fashion sense, and Tiffany was reportedly popular with her clothing choices. She once wore a Miu Miu Metallic Brocade Dress, which came with a price tag of $3,500.

TWICE is my favorite Kpop girl group. TWICE consists of Nayeon, Jeongyeon, Momo, Sana, Jihyo, Mina, Dahyun, Chaeyoung, and Tzuyu. Some of their songs are so catchy that even those who don’t speak Korean can easily pick up a few words.

All the members are equally talented and fashionable. However, TWICE’s Momo has a super expensive taste for clothing.

Among the list of her expensive collection of clothes, Momo was once seen carrying a Philipp Plein “Can’t You See” leather jacket, which comes at a price tag of $6,658. Yes, that’s the same amount one can buy a used SUV in the USA.

CL is a Kpop soloist known for her onstage presence and fashion choices. Though she has a massive collection of expensive clothing from major fashion and luxury brands, nothing can compare to her Versace Intarsia mink fur coat, which comes at a costly price tag of $39,174.

After doing some research, I also found out that only a handful of people own the Versace Intarsia mink fur coat, making CL’s clothes a little more exclusive.

EXO is another Kpop boy band reining on International K-pop stations for over a decade. The group consists of 9 members: Suho, Xiumin, Lay, Baekhyun, Chen, Chanyeol, D.O., Kai, and Sehun.

EXO has been awarded multiple times and has broken records for its songs and albums. Among the members, EXO’s Kai was once seen wearing a Burberry Sketch Tropical Trench coat that comes at a whopping price of $2258.

ITZY is a popular Kpop girl band with 5-members – Yeji, Lia, Ryujin, Chaeryeong, and Yuna. All the members are known for their over-the-top fashion and clothing.

Most ITZY members are the brand ambassador of major luxury clothing brands and what’s insane about this is Ryujin’s  “ICY” outfit which costs somewhere between $2,195-$3,561.

Ryujin is also known for overpriced clothing for leisurewear, sportswear, and airport fashion.

GFriend is also known for its members wearing overpriced clothing. GFriend’s Eunha was seen wearing a Prada Duchess Dress with Tie-Dye Paint, which comes at a price tag of $5,950.

MAMAMOO members are over the place. The group consists of 4 members: Solar, Moonbyul, Wheein, and Hwasa. All the members are known for their rebel lifestyle and out-of-the-box music concepts.

All the MAMAMOO members are also known for expensive taste, and Moonbyul is known for her classic clothing and street style fashion. Moonbyul once wore an iconic outfit for the music video Gogobebe that cost around $3100.

Now it’s time for the most popular Kpop band on the planet right now. BTS has done everything at this point, and they even became the bridge to Kpop being famous on an international platform. Though BTS is known for its exclusive clothing and fashion accessories, V is known for his expensive taste in clothing and food. However, one thing that gained everyone’s attention was his printed jacket which cost around $7204.

BIGBANG’s G-Dragon paved the pay for Korean street fashion, and some of his outfits are priceless beaus they are exclusively made for him.

No single piece of clothing costs less than thousands of dollars because most of his outfits fall in this range. 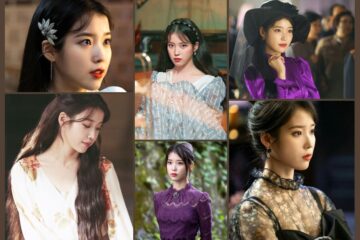 It’s been years since “Hotel Del Luna” episodes were released, but no one can forget IU’s beautiful dresses and how she carried them in the series.