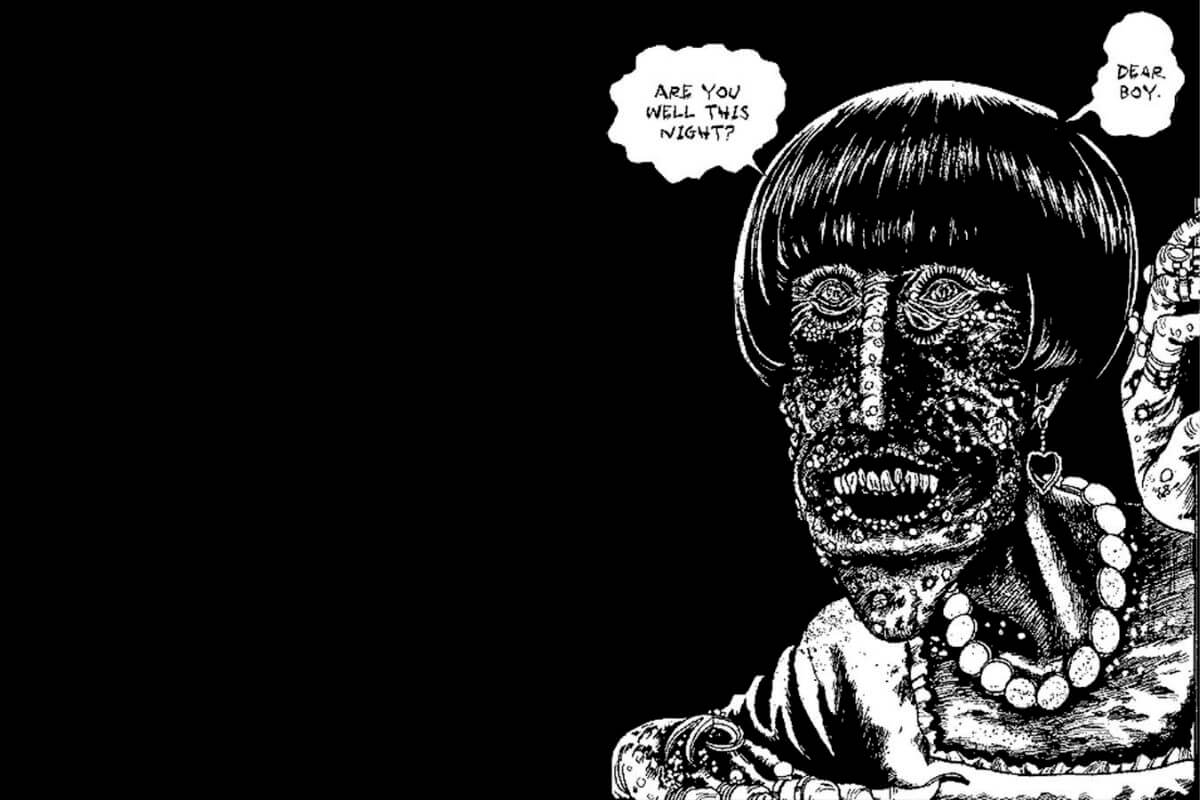 Junji Ito is the master of Japanese horror manga, and these are just the tip of the proverbial iceberg with other more remarkable stories I might have missed out on. I’m so sorry, but here they are now in no particular order.

These volumes by the mastermind of manga horror have been tried and tested over and over again. Junji Ito’s collection of horror manga is pure gold, and here are some of these titles that will give you goosebumps or at least will stay in your mind forever.

We’ll start off on one of the more grounded stories before turning the dial to 11. Kuriko, our main character, is reminiscing about the times she had in the playground where she used to bully a smaller child Nao up to the point of getting him mauled by a dog.

They meet again as adults, and Nao explains that he always returned to being bullied because he was in love with her. They soon get married and have a boy, Hiroshi, who looks precisely like Nao as a child—soon after, Nao just left his family, never to come back. After four years, Kuriko still believes that Nao will go home any minute, so she refuses to leave the house.

One day she forgetfully calls the child Nao, and when Hiroshi asks who that is, she tells him Noa is his father and tells him stories about how he used to bully him as a kid. She promises to take Hiroshi to the playground and reenact how she drove Nao as a child to take her frustrations on the child that is the spitting image of his father.

Yui lives in a tiny apartment with her father and her bully of a brother. As the restaurant is just above the kitchen, everything in their house is covered with grease and oil. Goro, her older brother, has acquired a habit of drinking oil.

One night her brother Goro’s bullying takes on a whole new level as in a very graphic scene, he pops all his pimples over Yui’s face. Their father sees this and kills his son. Afterwards, he feeds him to his business patrons, and the crowd instantly falls in love with it. Yui begins to show the symptoms his older brother showed, like severe acne and a short temper.

One night she wakes up to her father pouring oil down her throat. Without Yui on board to drink oil, her father closes the restaurant and begins drinking oil. Yui catches her father cutting off his leg to serve in the restaurant since Goro’s corpse had all been eaten.

She refuses to drink the oil. She observes that her father’s leg is not leaking blood, only grease, as she realizes the saturation level of grease in his body is now 100%.

This short manga is regarded by many as Junji Ito’s magnum opus, bonus content after the conclusion of Hellstar Remina. The story starts with a shut-in called Michio. He gets contacted by his former classmate Natsuko Horie inviting him to a party as all the middle school batch mates are turning 20, so becoming an adult in the eyes of the Japanese government.

After that, he reluctantly agrees to go to a café with another pair of classmates, Noriyuki Sakai and Keisuke Kasagi plus Natsuko. He discovered six bodies stitched together with fishing wires on his way home. Pamphlets were dropped from the sky, and there were radio commercials about coming to join the Army of One, but with no contact details.

Michio learns of internet rumors about the infamous Army of One behind “stitch murders.” Keisuke disappears after attending a party, and his body is found several days later, sewn together with those of the other party guests. On Christmas, bodies turn up, sewn together into bizarre patterns and decorate the streets and Christmas trees.

Although the government has warned against congregations, the ‘coming of age’ party continues as planned after Michio arrived late; no one was there. Later, all 500 guests were found to have been sewn together.

People avoid all forms of connections with the outside world. In the midst of all this, Michio calls Natsuko. Michio is prepared to go to her home to comfort her. The Army of One planes drop fliers over them as he heads out to see her.

However, the Japanese air force soon arrives to do an aerial battle with them. To witness the defeat of the Army of One’s, Michio runs over to Natsuko’s house to tell her he loves her. He finds her sewing her parents and their dog together, singing the Army of One song to herself.

The Window Next door

This story is what scared me when I first read it. Hiroshi Sakaguchi and his family move into a new house, and he is curious about their neighbor who never leaves the house and is only seen from time to time in the single window opposite his bedroom.

That night Hiroshi hears his voice and looks out to see a grotesque, skeletal being whose words don’t do justice to, inviting him to come over. He falls back asleep and then, on the next night, hears his neighbor again, sounding angry he didn’t visit.

When he opens the window, he is horrified to see her attempt to cross over using a washing line pole. He begs his parents to change rooms with them, and for a few nights, he and they are not disturbed while sleeping.

This emboldens Hiroshi to move back to his room. That night he could hear the woman trying to knock on her door with her bare hands. She is disappointed but assures him she will be able to make it over by the next night.

That night, maybe, sensing Hiroshi’s intention of pushing her out his window, he did not knock. He finally has some proof for his parents and the police as the window next door had grown to within a few feet from Hiroshi’s bedroom.

He has now resigned himself to death or worse with a Bushido-like calmness while his parents argue about moving out.

He has a horrible nightmare where things happen at one year per night, and it only gets longer by a year each day until his body can no longer keep pace with the time-lapse in his dreams and crumbles to crystal-like powder.

This occurs in a hospital where a patient is for brain surgery; Mami screams about how death had come for her when the only visitor was only Tetsuro  Mukoda.

Dr Kuroda explains that he had been giving doses of Mudoka’s remains to her, thinking that he would want to live like that in a short while. The next night Mami also felt like she lived an entire year.

The Enigma of Amigara Fault

An earthquake on Amigara Mountain, near the quake’s epicenter, has revealed countless human-shaped holes in the mountain rock face. The scientists studying the fault determined the holes were artificial but then, over the centuries, have been covered up by dirt and soil.

On the slope, two hikers meet, Owaki and a woman named Yoshida. She explains that she came here because she saw her exact silhouette on T.V. Another man also corroborates the story and enters his hole after stripping.

A rescue team is sent in after him but could not pass through more than a few yards. Yoshida says her silhouette is calling out to her. She knows it would be the death of her, but still, she feels compelled to go to it. As time passes, more people find their silhouettes and enter the mountain.

She enters the mountain, and a disheartened Owaki soon discovers his hole and enters it. After a few weeks, scientists found another hole system on the other side of the mountain, but these are deformed and elongated to impossible proportions.

A worker flashes his light inside the hole and is horrified to see someone or something coming through the hole.

This short story follows a high-school teenager, Kirie Goshima and her boyfriend, Shuichi Saito, and the citizens of the small, quiet Japanese town of Kurouzu-Cho, Black Vortex Town), which is cursed by supernatural events involving spirals.

The city manifests this in various ways, such as people becoming obsessed with spirals and falling into a state of paranoia. Shuichi becomes a recluse after his parents are contorted to form spirals, leading to their death.

After some convincing by Kirie, the pair tries to escape but fails. Even during their brief sojourn into the real world. Years have passed in Kurozu-Cho as time works faster within the confines of the curse. The whole town had built their houses to make a gigantic spiral.

Suichi is captured and thrown into a pit with the other dead from body contortions. He feels the curse taking hold and tells Kyrie to leave him. But she joins him nevertheless as their bodies become entwined with each other.

As a Japanese idol, Terumi committed suicide by hanging, rumours that a balloon bearing her face and head were seen across Tokyo. Terumi, Kazuko and Terumi’s boyfriend Shiroishi are all classmates together.

The trauma the two left behind face mounting as many fans blame her boyfriend while others commit copycat suicides. Shiroishi tells Kazuko that the head floats into his garden every night, staring at him accusingly.

One night, Shiroishi tells her that the head is hovering over the town. Kazuko goes out into the streets and sees the head for herself. The head then lures Shiroishi into hanging himself with the metal noose attached to the balloon.

His head pops off and joins Terumi’s in the sky. His body had also disappeared while Kazuko went to call the police. None of her friends believes her story at school until balloons with their faces descend with metal nooses and hang all the girls except Kazuko and a friend named Chiharu.

While they are hiding, the Chiharu balloon gets shot at and explodes, which causes her real head to explode. Balloons have now appeared for everyone living in Tokyo.

Kazuko has lost her parents and younger brother to their balloons, and she is stuck inside her own house until hunger gets the best of her, and she would have to risk going out.