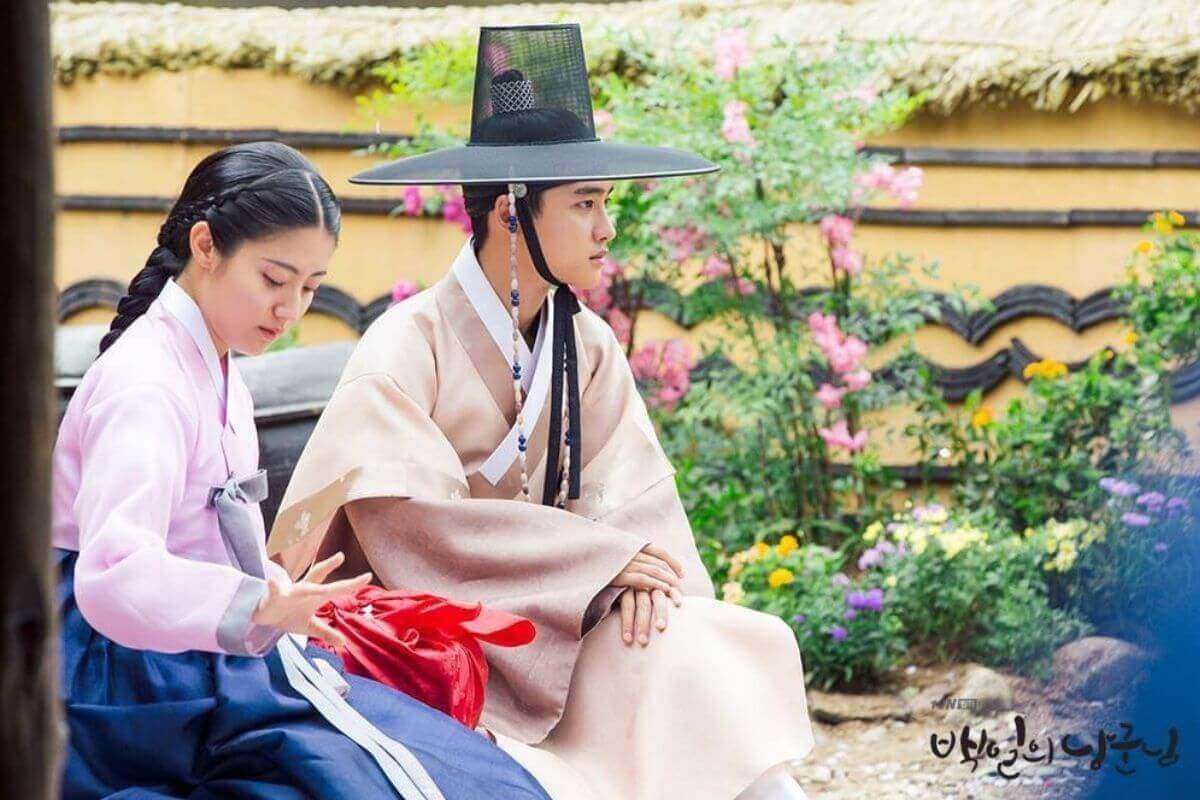 As per reports, 100 Days My Prince Season 2 is predicted to be released around mid-February 2022. Although my analysis can’t give justice to how beautifully directed the drama was, I have come across ten reasons which might have touched people’s hearts which led to it being one of the top-rated dramas in South Korea. While the new generation often finds Historic dramas quite monotonous, let’s try and find out what makes this Historic drama so unique.

The perfect depiction of how pure and strong childhood love can be! :

The drama begins with the first encounter of young Lee Yul (Do Kyung Soo) and Yoon Yi Seo (Nam Ji Hyun). Being carefree yet superior among the other kids of the neighborhood, Lee Yul always played the part of a hero and never paid attention to academics.

He was also the nephew of the King. He fell in love with Yi Seo, an intelligent yet brave little girl. One day, he was bold enough to confess his love for her when she questions him, “Do you like snow or petal shower better?” He replied with” I like you. I am going to marry you.” And let me tell you that this is my favorite scene in the entire drama.

Later after the confession, Lee Yul bravely puts himself in danger to save Yi Seo and her brother. Honestly, if you believe in childhood/first love, you should definitely watch ‘100 Days My Prince.’

The politics of the Royal people for the throne

One night, unexpectedly, Yi Seo’s residence gets assaulted by the evil man Kim Cha Eon (Jo Sung Ha) and his men. Many others with Yi Seo’s father and the King get killed, while Yi Seo and her brother Yoon Seok Ha (Kim Jae Young) successfully run away with the help of Yul.

How elders’ actions can change the personality of a happy-go-lucky child: Yul’s heart gets crushed when he comes to know that the mastermind of the whole disaster was none other than his father himself. Yul’s misfortune doesn’t end here. He is left bereaving of his mother’s mysterious death. Then he was forcefully made the Crown Prince of the Empire. The painful screams of the kid will surely shatter your hearts into pieces.

Turning into an adult, he becomes very emotionless and rude in behavior. Every day he spent in the palace was torturous to him. Lost was the carefree boy who used to spend all his time playing. You would rarely see him smile while living in the palace. Although surrounded by several servants, he was the loneliest of all.

Also, even if you don’t understand the Korean language, I am sure that you will learn the Korean word for “uncomfortable” as it is Yul’s favorite word indeed (now come on! watch the drama and find the Korean word yourself!) However, he soon became a talented person skilled in martial arts and academics. No matter how much his personality changed, one thing that never changed was his love for Yi Seo.

The loving relationship between a brother and a sister

Although the Yoon siblings get out of the chaotic situation for a while, they can’t go a long way. Yoon Seok Ha, for saving Yi Seo hides her under dry leaves and allures the men chasing after them.

Before leaving her, he assures her meeting at the bridge on the full moon day, even if they get separated. He even begs in front of Kim Cha Eon to spare his sister’s life.

In return for his sister’s life, Kim Cha Eon turns him into an assassin and is later assigned to kill the Crown Prince. For years, Yi Seo kept on going to the bridge on the full moon day of every month, in the hope to meet her brother again, just to get disappointed every time.

Both brother and sister now had a new name and life, almost forgetting their old one. Yoon Yi Seo was now Hong Sim and, Yoon Seok Ha was now Mu Yeon. Although after meeting her brother after years of longing, her dream of living the rest of her life with him remains unfulfilled.

Yul’s journey of living as a villager started at his royal mansion and was hilarious and worth watching. The real comedy starts when Hong Sim (Yi Seo’s) father finds Yul, wounded and unconscious, and after waking up, he realizes that he has lost all his memory. In Songju village, he gets a new name Won Duek.

The love of a Foster Father

Throughout the series, you will find one man constantly worrying about Hong Sim and her father’s future. To save her life, her father even lies to Yul that his name was Won Duek and creates a false story of Won Duek and Hong Sim being engaged in the past before he went to the military. He also loves and cares for Won Duek like his son.

The suffering of the commoners and their unity

Right from the beginning, we see the various sufferings of the poor peasant families of the Songju village. Sometimes they were not even treated as humans. They merely had food to eat and, the drought made it even more difficult for them. We could even see the meager means of their income.

Once declared that all the singles should get married, they even had to marry without their will. Despite all the troubles, the villagers were always there for each other. For instance, whenever Hong Sim was in trouble, she was always helped by her best friend Kkeut-Nyeo (Lee Min Ji) and Won Duek by Kkeut-Nyeo’s husband – Gu Dol (Gi Du Kim).

The salience of inanimate objects

There were two inanimate objects of great importance: the hair tie that Yi Seo tied on Yul’s wound when they were kids, and the second, Yul’s diary named Silent. Yul kept the hair tie for years. When nothing was helping him to remind him of his past, he found the hair tie in a wooden box which prompted him that Yi Seo and Hong Sim are the same. When Yul found his diary back, he finally recollected all the memories of his past that he couldn’t remember earlier.

The pain of separation between lovers

The evil Kim Cha Eon’s daughter, Kim So Hye(Han So Hee), had a secret relationship with Yoon Seok Ha. When the crown prince and Kim So Hye (his wife and the crown princess) were ordered to consummate to get rid of the drought, Kim So Hye was already pregnant with Seok Ha’s baby.

Later in the drama, Kim Cha Eon finds out whose baby her daughter is pregnant with, he ultimately kills Seok Ha. The scene was harrowing when finally both Kim So Hye and Seok Ha got to run away from the palace. She shrieks and screams to her father to spare his life but ends up seeing her father putting a spear into his heart. Later, she lives in hiding and gives birth to a baby boy whom she names Seok Ha as she wishes to remember the name for a long time.

Seok Ha’s voice was played in the background and, a few moments later, the scene appears when he was telling a beautiful story of a Dandelion to So Hye. Perhaps the contrast between the terribly aching and the heavenly euphoric moments of their past was being shown.

Even though, in the end, Yi Seo and Yul get to be together, they face a long separation before having a happy ending. For Yi Seo, she never gets married again and lives like a single woman in her village. Yul misses her so much that he writes about her and his loneliness in his diary every day.

Destined people are meant to be with each other

Yul and Yi Seo’s love story began when they were mere kids, followed by them getting separated. Even the shaman says that they both loved only one person all their lives. But destiny brings them together after years as Hong Sim and Won Duek.

Although I loved Hong Sim and Won Duek’s chemistry, there was one man I adored throughout the series. Jong Je Yoon (Kim Seon Ho) helps Yul remember his past. Even though he couldn’t recognize people’s faces because of his disease, he could still distinguish one pretty face from others, which was Hong Sim’s face. Jong Je fell for Hong Sim at the very first sight. He was both faithful as well as a trustworthy person. Even though Jong had feelings for Hong Sim, he never created problems in Hong Sim’s and Won Duek’s love story. He was loyal to the crown prince. I must warn you that you are going to fall for him too!

Although his love for Hong Sim while Mu Yeon and So Hye’s love for each other was very pure, unfortunately, destiny didn’t want them to be together.

I tried to scrutinize the K-drama to the best of my ability and find the possible reasons for its popularity. I’m very excited about Season 2 of the shoe and hope you liked my inspection!

Read the other reviews below!

1 thought on “Why is ‘100 Days My Prince’ one of the highest-rated dramas in Korea?”